As in the other math areas tested on the SBAC, the emphasis is on being able to explain the geometry operations and procedures you do and why they work to produce a correct answer. So, be sure you really understand all of them. Also know that geometric ideas may be combined with other math skills to solve problems and that many of them use on this test require a thorough understanding of much simpler geometric concepts.

Skills to Understand and Be Able to Use

It will be important for you to be comfortable using the terms defined below when performing transformations in the plane with various geometric objects..

angle— An angle is the formation of two rays that share a common endpoint. We often think of an angle being created by taking an initial ray and rotating it about its endpoint to the terminal ray.

circle— The set of all points that are equidistant from a fixed point in a plane.

perpendicular line— A line that intersects another line at a 90 degree angle. Perpendicular lines’ slopes are negative reciprocals of each other. Other terms used are normal and orthogonal.

parallel line— A line is that does not intersect another line in the same plane. Parallel lines have the same slope.

line segment— A portion of a line that can be measured. The measurement is taken between its endpoints.

point— A point describes an exact position in the plane. In the coordinate system a point is defined by an ordered pair \((x, y)\).

line— Geometrically, a line is straight and extends in opposite directions without bound. A line contains line segments and rays.

distance around a circular arc— The length of the portion of a circle that is formed by the circle’s central angle. It is also defined as a portion of the circumference of a circle.

Rigid transformations include translations, rotations, and reflections. These types of transformations only move and object but do not change its shape or size. They are also referred to as isometric transformations for this reason. For example, you can reflect \(f(x) = x^2\) about the \(y\)-axis or \(x = 0\) using \(f(-x) = (-x)^2 = x^2\). Notice, the graph of \(f(x)\) is already symmetric around the \(y\)-axis, so it is its own reflection. You should also be able to translate a figure by moving each point in the figure the same distance in the same direction. This type of transformation is also referred to as a glide.

You will need to transform a figure about a fixed point by rotating the points on the figure by a given angle whose vertex is the fixed point. The points move along the circular arc formed by the angle of rotation. A reflection moves the points on the figure across a line whose distance is equal to the distance the original point is to the line of reflection. The line segment formed by the point and the reflected point should be perpendicular to the reflected line.

You will need to be able to perform one or more of the transformations that map one geometric figure onto another. There may be different combinations available to do this. For example, reflecting a square about the origin in the coordinate system is equivalent to reflecting the square about the \(x\)-axis then the \(y\)-axis.

Using the Definition of Congruence

There can also be a minimum amount of information given to show that two triangles are congruent.

In each case, all three of the corresponding angles and sides are congruent for the two triangles by CPCTC.

You will need to be able to dilate a geometric figure or a function. As noted earlier, a dilation does not change the shape but only the size of a figure. Some things to remember are: 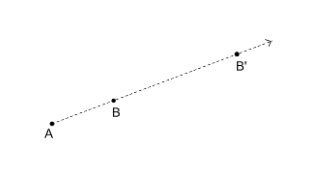 Similarity is like congruence of geometric figures but the figures do not have to be (and typically are not) the same size. Dilation is a key transformation when drawing similar geometric figures.

The Definition of Similarity

You will need to determine if two geometric figures are similar by showing that their corresponding angles are congruent and corresponding sides are proportional. A dilation is a similarity transformation since the sides that are transformed change by the same factor. 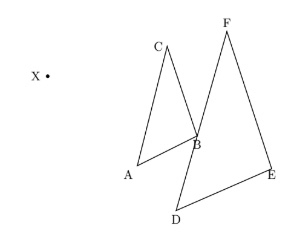