Functions give us tools to use in solving mathematical problems. They’re like keys that unlock the answers to complex mathematical questions. You’ll need to be fluent in their creation and use and be able to explain the whys and wherefores of their construction and their role in problem-solving.

Skills to Understand and Be Able to Use

Equations are used to show a relationship between two quantities. Functions are similar, but use a rather different way of thinking and writing. The sections below elaborate on the concept and notation of functions.

What Is a Function?

In function notation, we write \(f(x)=x^3\), where \(f(x)\) means function of x and we read it as f of x. The right side shows what to do to x to produce an output value. The left side represents the output of the operation on x.

We will look at linear and exponential functions, along with arithmetic and geometric sequences.

Parts of a Function

Not all relations are functions. To be a function, each input value has to produce only one output value. It is OK for two different inputs to produce the same output, but not vice versa. To graph a function, it makes sense to use f(x) for the vertical axis instead of y, although you will often see y used when a function is being graphed.

A common problem you will run into will ask you to evaluate a function for a certain input value. For example:

This is asking you to substitute 2 for x in the function and see what you get.

It’s common in working with arithmetic sequences to come across the formula \(a_{n}=a_{1}+d(n-1)\), where \(a_{n}\) represents the \(n^{th}\) term of an arithmetic sequence, \(a_{1}\) represents the first term, d the common difference between consecutive terms, and n the number of the term you seek. This can just as well be thought of as a function of n, written this way: \(f(n)=f(1)+d(n-1)\), which is an explicit definition. If you know the first term and the common difference, you can find any term you want in one calculation.

Suppose a foot traffic counter is installed in the doorway of a store and the function \(n(t)\) represents the number of customers, \(n\), that pass through during the \(t^{th}\) hour after opening. What is the physical meaning of the statement \(n(2) > n(7)\)? This is an example of interpreting a function in the context of a specific situation. \(n(2)\) is the number of people passing through during the \(2^{nd}\) hour and it is larger than \(n(7)\),the number passing in the \(7^{th}\) hour. That’s the answer to the question.

You should be able to do this kind of interpretation for a variety of functions, particularly linear, quadratic, and exponential ones. 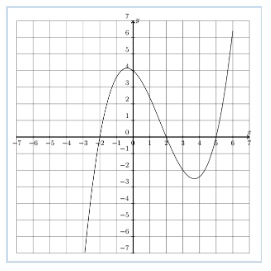 Given a description of a function, you should be able to draw its graph using the same key features as you would in graphing an equation. The graph above is for \(f(x)=x^{3}-4x\). Just as with equations, you can use the three zeros of the function, -2, 0, and 2,along with a relative maximum at about \((-1.1,3)\) and a relative minimum at about \((1.1, -3)\) to graph the function. Other useful features are regions that are positive or negative, or increasing or decreasing. Graphs can be periodic. (We’re looking at you, trigonometry.)

Describe an appropriate domain for a given function. For example if a weekly paycheck is represented by the function \(p(h)=14h\), an appropriate domain could be all positive real numbers. In practice, though, the numbers of hours worked may be rounded to the nearest quarter hour. In that case, the domain would be {0, 0.25, 0.50, 0.75, 1, 1.25, …}. (Of course there are only 168 hours in a week, so that would impose an upper limit of 168 on the domain. Chances are, though, that no one will ever work that many hours, though there are some weeks it may feel that way.)

To compare two functions where one may be in graph form, say, and the other may be shown algebraically or in a table, a good approach is to change one representation into a form to match the other. For the example of having a graph and a table to compare, try changing the data table to a graph. That way any differences or similarities will be visually apparent. In a simple linear function, you can probably compare the graph and the algebraic version as is.

To see the behavior of the graph at the ends, try putting something larger, like 10, in for x. Does f(10) get larger? Yes indeed: 990. Then the graph is rising to the right. Now try -10 for x. That gives you -990, which means the graph is falling on the left. Some polynomials rise on both sides and some fall on both sides. 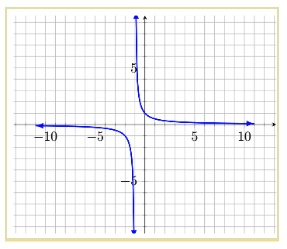 Rational functions are in fractional form with some form of x in the denominator, by itself or with other terms, and often in the numerator as well. Since the denominator is not allowed to be zero, there will always be some value(s) for x that are not allowed in the domain of the function.

A simple example is \(f(x)=\dfrac{1}{x+1}\), the graph above. The value of x can never be -1, which means that when you graph the function, the graph cannot exist at \(x=-1\). There will be an asymptote at \(x=-1\). The graph will approach \(x=-1\) from both sides, but never quite get there. You should review graphs with asymptotes to get a more complete picture of this. 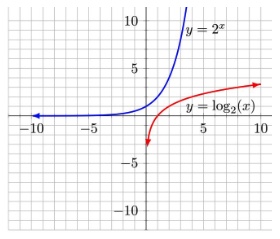 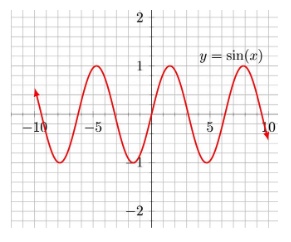 Graphs of trigonometric functions are periodic, meaning that they show a pattern that infinitely repeats itself, as the input values change positively or negatively. As the graph extends to the left and right, you can see how far a pattern goes before it starts to repeat itself. This portion of the domain is called the period of the function. For example when you graph \(f(x)=sin(x)\), as above, you will see a pattern that starts at \(x=0\) and starts to repeat at \(x=2\pi\ \approx (6.28)\). The period is \(2\pi\). The midline goes horizontally through the middle of the graph. In this case it is the x-axis. The amplitude is the height of the graph measured from the midline. In the sine graph above, the amplitude is 1. Be aware of the patterns in the other five trig functions as well as the sine. 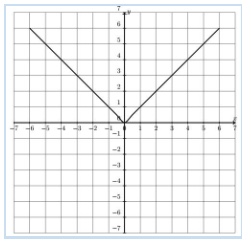 Other Functions and Ideas

Square root and cube root functions can usually be handled by just plotting a number of points. Piecewise functions are defined by dividing the domain into sections and using a different definition for each section. See the example below, which shows how to define an absolute value function in two pieces (as a piecewise function. The graph is shown above.