Genetics is the study of genes, the portions of DNA that result in genotypic and phenotypic traits that are passed from one generation to the next. An organism’s genotype is its genetic makeup, which includes both dominant and recessive alleles (or variation of a gene). An organism’s phenotype is the physical expression of its genotype.

Deoxyribonucleic acid (DNA) is the nucleic acid containing the nucleotides adenine, guanine, thymine, and cytosine that provides the blueprint for cell replication. Variations in DNA account for the different genetic and physical traits of organisms.

Meiosis and mitosis are the processes by which cells replicate. Sex cells undergo meiosis, which combines the genes of two individuals to produce a new genotype. Somatic (body) cells undergo mitosis and create two daughter cells with the same genotype as the parent cell.

Humans have 23 pairs of chromosomes, or tightly wrapped strands of DNA, that provide the instructions for metabolic processes, building cellular and tissue components, as well as other body functions. One pair of chromosomes is linked to sex: females exhibit a homozygous XX chromosome and males exhibit a heterozygous XY chromosome.

A Punnett square can be used to determine the potential genotypes of offspring between two parents. It is a large square with four (or more) squares inside, with the rows and columns corresponding to the alleles of the parents. Two heterozygous parents are shown with a capital letter and a lowercase letter along the left and right columns and down the top and bottom rows. The offspring genotypes are found by filling in the four (or more) boxes with the letters found at the top and to the left of the Punnett square. Heterozygous parents produce two homozygous offspring, one AA, one aa, and two heterozygous offspring, Aa. 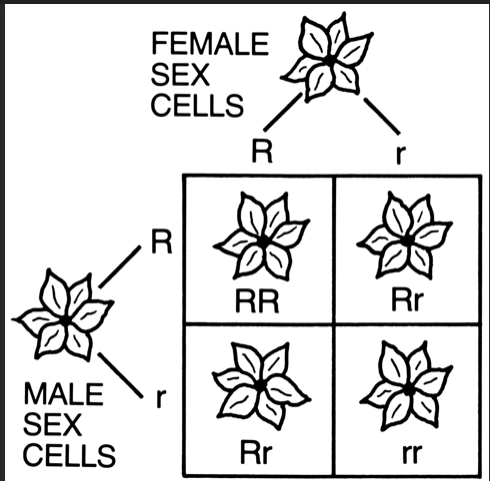 To figure out what goes in each of the boxes, you must find what alleles from each parent meet up in that box. For example, if you look at the box on the top left, you see that there is RR inside the box. That means that the R from the female and the R from the male both met up inside that box. This process should be repeated for the other three boxes.

In order to have a better understanding of genetics, you should be able to understand and apply the following terms:

Gregor Mendel—Gregor Mendel is considered the “Father of Genetics” as his work with pea plants formed the basic ideas of genetics that we understand today.

Haploid—A haploid is a single set of chromosomes found in gametes (ex: egg or sperm).

Genetic code—This is the combination of nucleotides found along a DNA sequence that carries genetic information.

Nucleotides—Nucleotides are compounds that are the structural foundation of DNA. They include adenine, thymine, uracil, cytosine, and guanine.

Double helix—This is the shape that DNA takes as two single strands are connected to one another.

Cells are the most basic structural unit of life. Prokaryotic cells are those that do not contain a membrane-bound nucleus or organelles; they are single-celled organisms. Bacteria are an example of a prokaryote. Eukaryotic cells are those that contain a membrane-bound nucleus in addition to other organelles; they are single-celled or multi-celled organisms. Humans are eukaryotic.

Animal cells are different from plant cells in the organelles they contain. Organelles are analogous to organs in humans and perform the tasks necessary to preserve the metabolic function of the cell. Animal cells also contain lysosomes, which are not usually present in plant cells.

Many of the functions performed by the body are also performed by the cell. Cells produce energy in the mitochondria, generate waste through cellular processes, and eliminate this waste with lysosomes. They regulate internal fluids with vacuoles and remain isolated from their environment by way of the cell membrane or wall.

During cellular respiration, glucose molecules are ultimately transformed into ATP that our body can utilize for energy. The first step in cellular respiration is glycolysis. During glycolysis, glucose is broken down into two pyruvate molecules, two \(\text{NADH}\), and two \(\text{ATP}\) . The two pyruvates generated undergo pyruvate oxidation. This process turns pyruvate into acetyl \(\text{CoA}\) and creates \(\text{NADH}\) and carbon dioxide \(\text{CO}_2\). The acetyl \(\text{CoA}\) is used to initiate the Citric Acid Cycle (\(\text{CAC}\)), also known as the Krebs Cycle. During this process two \(\text{CO}_2\), one \(\text{ATP}\), one \(\text{FADH}_2\), and three \(\text{NADH}\) are produced per turn of the Krebs Cycle.

Somatic cells (non-sex cells) are divided via a process called mitosis. In mitosis, two identical daughter cells are formed. It is made up of four steps: prophase, metaphase, anaphase, and telophase.

Sex cells, also known as gametes, undergo meiosis to divide. In meiosis, a single cell is going to divide into four different cells, all with half the original amount of chromosomes that started.

Biosphere—the parts of Earth where life exists; remember that “bio-” refers to life.

Biome—a group of land ecosystems, all which share similar climates and organisms.

Ecosystem—a group of living and nonliving parts that live in the same environment that interact together.

Community—the interaction of all populations in a given area.

Population—a group of organisms that live together and come from the same species.

Producers—an organism capable of producing its own food (ex: plants)

Decomposers—organisms that break down dead plants and animals.

Consumers—organisms that must eat another organism in order to obtain energy.

Consumer Hierarchy and a Food Web

To figure out what an animal preys on and who its predators are can be demonstrated using a food web, and it’s representative of an entire ecosystem. Arrows in a food web show the flow of energy from one organism to another. An example is shown below. 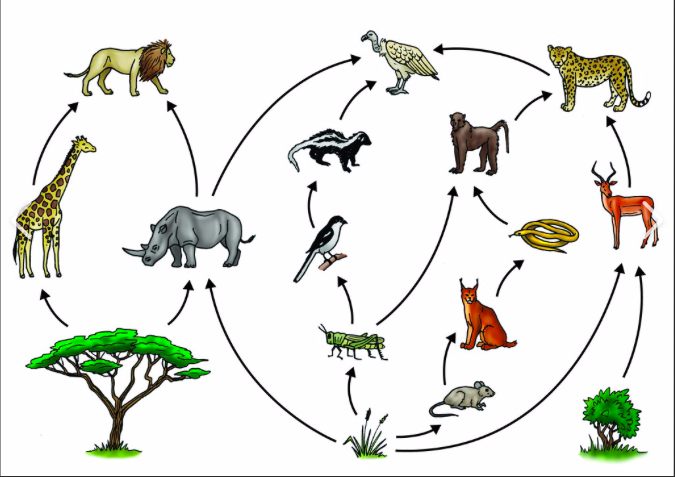 A mnemonic is useful for remembering the taxonomic structure: “King Phillip Came Over For Great Spaghetti”, for example.

Eukaryota—This is one of the three domains of life. This domain includes kingdoms such as plants, animals, and fungi. All organisms in this domain are considered eukaryotic, meaning that they have a nucleus in their cells.

Bacteria and Archaea—Organisms in these domains are considered prokaryotes, meaning their cells lack a nucleus or any other membrane-bound organelles such as a mitochondria and ribosomes.