The Assembling Objects section of the Armed Services Vocational Aptitude Battery (ASVAB) test is designed to measure your skill in spatial ability, or the ability to comprehend and remember relationships among objects. This part of the test requires you to look at separate pieces of an object and mentally fit them together. Although this test is not currently used as a significant indicator of one’s rank for most branches of the military, there are certain jobs in the Navy that do require a high score on this test.

With all the questions being the multiple-choice type and consisting of drawings, there are two major categories of questions found in this section: connection items and puzzle items. This section of the ASVAB contains 15 questions that need to be answered in 17 minutes.

The Two Types of Test Items

Connection items involve mentally attaching lines and shapes. They consist of a set of shapes and lines labeled with corresponding letters indicating the points of attachment.

For example, you might see a box containing something like this at the left end of the test item:

It tells you to pick the answer choice that connects point A to point B. 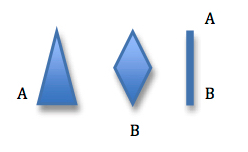 This would be a correct answer because point B has been connected to point A:

These would be incorrect answers, for the reasons shown:

(1) incorrect because point B is attached at the right of the triangle instead of at point A, which is on the left

Connecting the pieces may involve rotating or moving them, but it will never involve mirroring the pieces. Some of the incorrect answers may appear correct but have a piece that is actually a mirror image of the original. It can be thought of like a piece in a jigsaw puzzle: the piece may fit if flipped upside down, but it is not correct. It can only be rotated clockwise or counterclockwise to achieve the correct answer.

This is an example of an incorrect answer, because the shape is connected correctly, but it has been mirrored (flipped over) in the process:

The second type of question, puzzle items, consists of multiple shapes that you must mentally connect to create a new, completed shape. There are four answer choices from which to choose, each with lines indicating where the original shapes connected to form the new shape. The shapes in the question must all be present for the answer to be correct and no new ones may be added. These, like the connection items, may involve mentally rotating or moving the shapes but never mirroring (flipping) them. The shapes must be moved about in one’s head, much like puzzle pieces, and connected together to create a new shape.

A simple example of a puzzle item could look like this:

The questions in the Assembling Objects section will involve much more complex geometric shapes than this example and, usually, the pieces will first appear spread out and not connected in any way. But this example shows a bit of the mental dexterity needed for moving pieces about in your head to create new geometric shapes.

A Tip for Solving Both Types of Items

A sound tactic for discerning the correct answer for a puzzle item is to compare one piece at a time. If you select one piece from the original diagram and scan the four answers given to see which of the answers include this piece, you can often eliminate false answers quickly.

Using this same method, but looking for the dot, can work very well on a connection item. Note the location of the dot on the original shape and scan the answers, eliminating any that show the dot in a different location on that shape.