Page 1 - Cleaning Up English Study Guide for the English Basics

Person A: You are pretty sure of yourself when it comes to speaking or writing. You can put a sentence together, after all, and you generally know when to use a period and a question mark. You may or may not be qualified to speak at a convention of rocket scientists, but you’re fairly confident you can avoid the use of “ain’t,” etc., when speaking in public. Perhaps you are really good at expressing yourself in written and spoken form. You may even have an advanced degree or two. Great!

Person B: Speaking and/or writing scares you to death. You think you know the basics, but putting them all together seems impossible. Whether working on your GED or in possession of post-graduate certifications, you fervently hope that nothing in your future requires you to speak in public or write something that others will actually read. You’re afraid of making the dreaded grammar or usage mistake and embarrassing yourself and your school or company. You don’t want to be the focus of critics, at all!

Person C: You fall somewhere in between Person A and Person B. You think you know a little about speaking and writing, but are not sure of your competence in either. You wonder what you don’t know and you wonder if anyone else will notice mistakes that you don’t realize you’re making. Help!

We can help you all! We have gathered a number of common errors in speaking and writing, and we tell you how to avoid them. These mistakes are easily made, no matter how many advanced degrees you hold. They are things that have somehow just slipped under your radar…after all, you have more to think about than every single word you say or write. Unfortunately, a masterful speech or insightful essay can be marred by misuse of the English language, even if the errors are small.

It is rare that someone in your audience will point out these errors, but that doesn’t keep them from passing some sort of judgment about who you are. Your audience may totally miss your message, while they concentrate on a grammatical error. And, face it, at some time, you are probably going to put your speech or writing out there (by choice, or not)…why not be informed and attempt to prevent most errors altogether?

Take a look at these preventable, but incredibly common, errors made in speaking and writing. Use this guide, our practice questions, and our flashcards to refine and solidify your usage and grammar skills. Then, you’ll be ready for that next chance to write or speak and feel more confident about doing so.

We will be dealing with “Cleaning Up English” in four sections that are based on the most common errors made in speaking and writing today, as assessed by two English professionals. These are the areas that seem to give people the most trouble, in spite of classroom instruction. They include the types of errors many people don’t realize they’re making until someone points them out. So, arm yourself! Know better before you speak or write!

Words can definitely be weird. There are probably at least a few that you are fairly certain you use correctly—until you find out you don’t. So embarrassing! Avoid that situation by being sure you use words correctly, starting with these:

Often, we mix up words because there are so many that sound so similar when we say them that, when we write them, we use them interchangeably. But we can’t because they’re not the same. Below are charts with some of the most commonly confused words. By no means is this a complete list, but it’s the ones that are most commonly spotted by teachers and employers in assignments and applications. 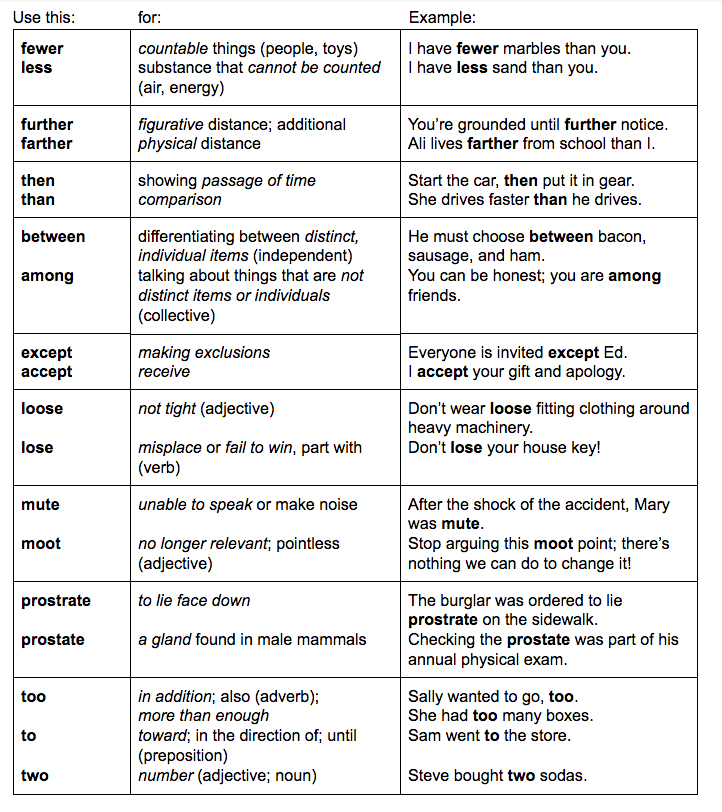 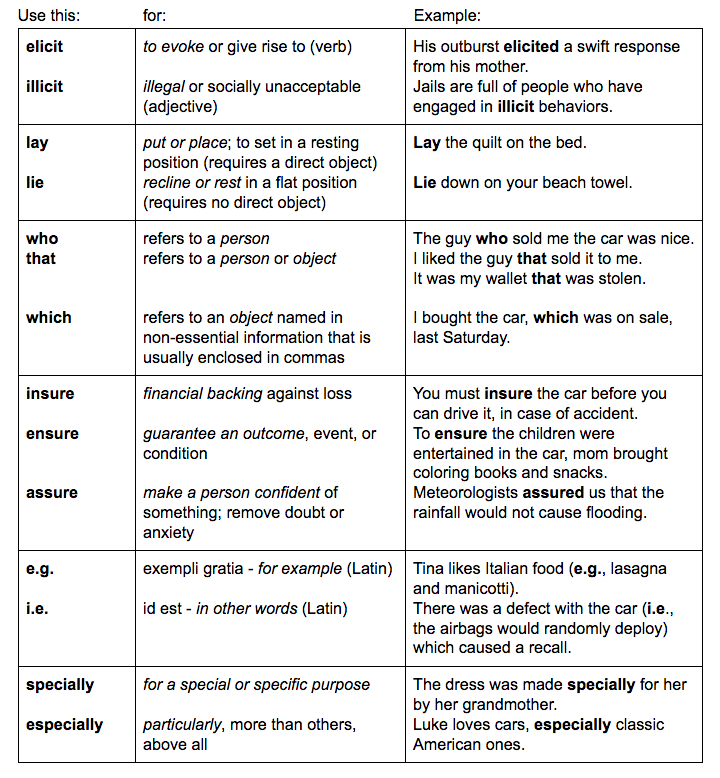 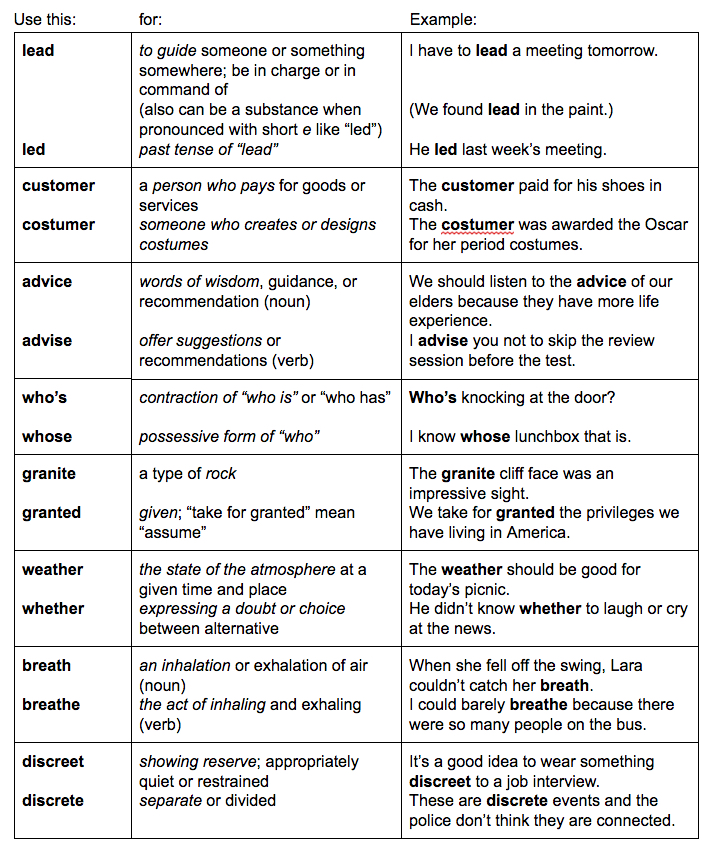 Some words are fine when used in certain circumstances, but not in others. This problem comes under the category of “betcha didn’t know!” (By the way, unless you are texting your best bud, “betcha” is not a word and translates to “I’ll bet you…”) 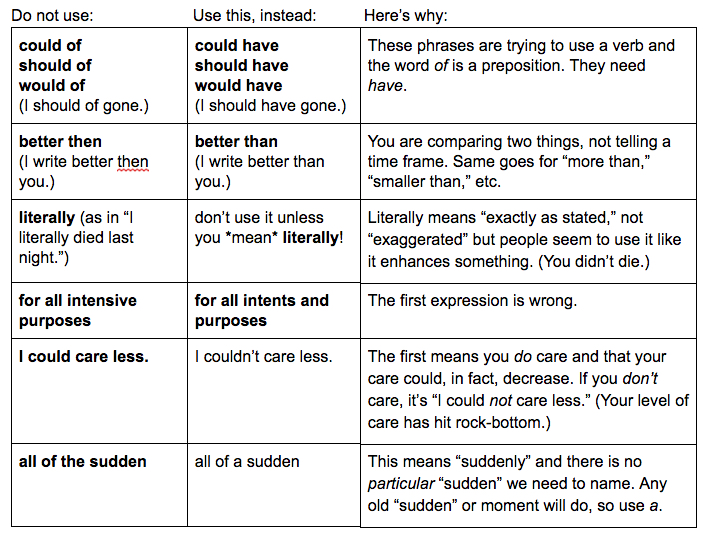 Simply putting letters together and writing or speaking their sounds does not make a word. There are quite a few of these things (we’ll call them “nonwords”) in common use, today. And the folks who use them don’t realize that the things they are using are not real words at all. Here are some to remove from your vocabulary. Don’t speak them. Don’t write them. Pretend they do not exist…which they don’t in correct English language!

It seems these two are an attempt at the very easy word combination I am. When you write it as a contraction, it becomes I’m because the apostrophe replaces the missing letter a. It’s hard to say where Ima comes from, but it needs to go back to wherever that is because it does not exist as a word in the English spoken or written language.

The word gonna is the classic mistake of writing something as we say it or hear it spoken. As speakers, we tend to become lazy, slurring letters or even words together to the point that it’s difficult to write them correctly. In this case, gonna comes from the phrase going to. Despite how we might say it, however, it cannot be written as gonna and be grammatically correct. For example:

Our lazy selves would probably rather say the first sentence as it requires less articulation and mouth movement, but it’s time to get those mouths in better shape because this nonword has got to go!

This is a common mistake for people of all ages. It comes, in part, from not considering or understanding the role of the prefix ir-. This prefix, when added to a root word, creates a negative because it means not. But so does the suffix, less. Therefore, the word regardless already means without regard. When you add a negative prefix to the front of a word that already has a negative meaning, it creates a double-negative, which actually makes it positive. So instead of saying without regard (which would just be regardless), if you use irregardless you are saying not without regard, or, in other words, with regard. It’s confusing and probably doesn’t convey the meaning you intended. If you are talking about not regarding something, use the word that already means that—regardless.

These conjugations of pronouns are incorrect and seem to come from not understanding how to move between plural, singular, and possessive forms of the words, allowing the wrong pronouns sneak in there. If there is just one guy, it’s him. He may look in the mirror because he finds himself attractive. A group of people is them but they may find themselves in trouble if they forget the m when they add the -selves to the end of them.

Because we tend to slur these two words together in speech, people often try to spell them as one word. That is incorrect. There is a word, allot, which is one word, but it means to set aside shares or pieces of (“I was allotted this piece of land by my grandfather.” “Our company allots one hour for lunch.”). However, if alot shows up, it is misspelled. When you are talking about the amount of something (a lot of apples) or the extent of something (she looks a lot like her mother), it should be spelled as two words—always.

This is just not a word. There is a word supposed. It is an adjective meaning assumed as true; hypothetically; according to what is to be believed. For instance:

“The supposed professionals didn’t seem to know what they were doing and made fools of themselves in front of the clients.”

When you add -ly to the end, the word becomes an adverb:

“Supposedly there was a ‘No Parking’ sign, but none of us saw it.”

There is no such word as supposab, so it cannot be converted to supposably. It’s really just a spelling issue.

Many people pronounce this word incorrectly, so how can people be expected to spell it correctly? The place where books are kept is the library. Even though it requires more mouth movement to pronounce that first r in there, it’s important and should be done. And when people say it correctly, it is more likely to be spelled correctly.

There is also an issue with pronunciation (and sometimes spelling) of the second month in the year for the same reason. That pesky first r just doesn’t roll off the tongue easily, so, although most people say, “Febuary,” it is actually spelled (and should really be pronounced as) February.

The stack through which smoke escapes an enclosed space, like a house, is a chimney. There is no other spelling for it. Santa comes down the chimney, Mary Poppins hung out with Burt, the chimneysweep, and “We could see the smoke curling out of the chimney from a mile away.”