Word problems are no doubt the biggest source of frustration for math students. While no method can work every time, the steps below are a good way to deal with a word problem.

Read the problem at least twice. The more familiar you are with the problem, the more likely it is that sooner or later you will have an AHA! moment, where you suddenly see how to do it.

Look for key words that will tell you what to do, such as total, sum, difference, fewer, etc.

Sometimes a picture helps, especially if the problem deals with physical things like area, volume, speed, depth, or distance.

Look back at recent formulas you may have used. Your problem probably uses one of those.

The ASVAB requires you to have a rudimentary knowledge of algebra and algebraic equations.

These steps will serve you well for equations that have only one variable, and the simplest quadratic equations. For example: \(2x^2=50\).

1. Isolate the variable: Get all the variable terms on one side of the equation (let’s say the left side) by using any of the properties of equality, and, in the same way, get all constant terms on the right side.

2. Do the same thing to both sides: It’s important to always do any operations to both sides. It’s kind of a golden rule of mathematics: “Do to one side what you did to the other.”

3. Confirm the answer: Once you have an answer, always substitute it back into the original equation to make sure it works.

Don’t forget PEMDAS either. When performing a series of mathematical operations, follow this order: Parentheses, Exponents (or powers and roots), Multiplication and Division (left to right), Addition and Subtraction (left to right).

An easy way to remember PEMDAS is to memorize the phrase: Please Excuse My Dear Aunt Sally.

Students may be required to solve for x (or other variable) in an equation, such as:

You always want to isolate the variable (x here) on one side of the equation so that your answer will be on the other side. To do this, you need to perform the opposite operation (attached to the number that needs removing) to both sides of the equation. This is how that would look for this problem:

Here, the opposite operation of the division shown in \(\frac{x}{4}\) is multiplication. So:

You may also be asked to find the square root of a number or the reciprocal of a number. Study and practice completing basic algebraic equations to prepare yourself for this part of the Mathematics Knowledge test.

Evaluate an Expression When Given the Variable Values

To evaluate an expression means to substitute given values for the variables and then simplify the expression using PEMDAS.

Any time you have an equation with two variables, one of those variables can be isolated, solving the equation for that variable.

A system of equations is one in which there are two or more equations with the same solutions. The type you are likely to see will have two equations in two variables. They will look like this:

One way to solve a system of equations is by substitution. Here’s how it works.

Given these two equations, solve for \(x\).

Step 1: Use one of the equations to solve for one of the variables in terms of the other. Let’s choose the second equation and solve for \(y\), because it looks easy.

In this method we add the two equations to each other, or subtract one from the other in order to get one variable to drop out. Then we solve the resulting one-variable equation. This example is pretty easy, but it will show the method.

Do you see that if you add the two equations together, the \(b\) terms will drop out? See below.

Here is an example with a little twist.

Adding or subtracting here won’t make either variable drop out. But, we have a trick. We will multiply the second equation by \(-2\) and then add them together.

Backsolving is what you do after you have solved for one variable, and want to solve for the other one. All you do is take the value you solved for and substitute it back into either of the original equations and then solve that. See below.

Graphs of quadratic equations are parabolas. Terms and methods of dealing with quadratics and their graphs are listed below.

There is another form that can be useful for visualizing the graph called the vertex form. If you have a quadratic in the form \(y-k=a(x-h)^2\), the vertex will be the point \((h, k)\). 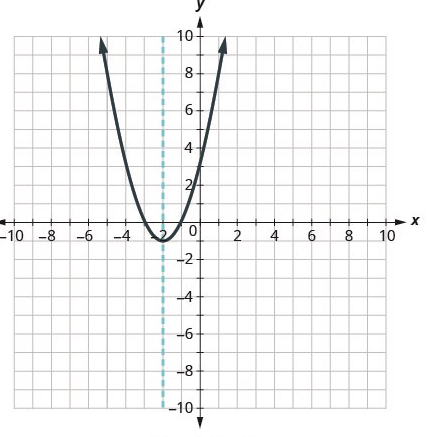 We saw how to factor quadratic expressions earlier in this guide. We actually did it earlier in the polynomial section. Here is another quick look at the process.

If the first factor is zero, we can write:

If the second factor is zero, we can write:

Suppose you need to solve the quadratic \(x^2-6x-3=0\). Factoring isn’t going to work here, so we need a different trick. That trick is called completing the square. The aim is to try to get a quadratic that is a perfect square on the left and then take the square root of both sides.

*Second step—Take half of \(-6\), square it, add it to both sides and factor the left side:

Third step—Take the square root of both sides:

Roots and zeros are very closely related and are easily confused.

For an equation that is set equal to zero, the root(s) of that equation are the values for the variable that make the equation true.

For a polynomial, the zeros of the polynomial are the values that, if you set it equal to zero and solved it, would make it true.

Discriminants: How Many Solutions?

The discriminant has three possible outcomes:

So the given equation has only one solution.

Given any quadratic equation, we can substitute the values of \(a, b, \text{ and } c\) into the quadratic formula. We will use it on the equation below:

After working with equations, inequalities probably seemed a little odd to you the first time you saw them. These reminders should bring you back up to speed on them.

There are four inequality signs that you should know:

Showing Inequalities on the Number Line 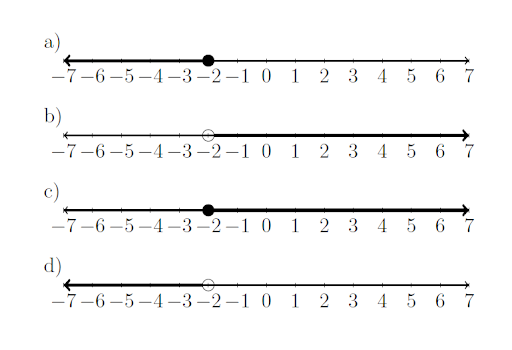 Inequalities can be solved just like equations. The big difference is that inequalities give you a whole range of solutions, like \(x \gt 7\), instead of just one or two solutions. We’ll do two examples.

Just as with equations, you can add to, subtract from, multiply, or divide both sides of the inequality by any number. See the second example for one big exception to this rule.

A different compound inequality is the set of numbers that are less than or equal to \(-2\) or greater than \(5\). The graph of this is below: