Questions in this area will concern electricity use in a home or business environment, including safety concepts.

Direct current is current that flows in only one direction. Alternating current, as its name indicates, alternates in the direction it flows.

Batteries produce DC, but rectifiers and commutators can also generate DC from AC. Alternators produce AC. In an alternator, a wire with a current running through it is rotated inside of a magnetic field. The position of the wire with respect to the direction of the magnetic field produces a current that alternates in direction.

A waveform has a frequency of 1 hertz (Hz) when it goes through one complete cycle of change in a period of one second. 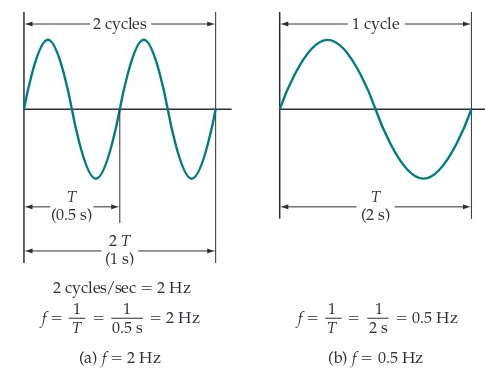 The frequency of the waveform is always found by inverting the time period:

where f is in hertz and T is in seconds.

The usual (North American) frequency for domestic and industrial AC supplies is 60 Hz. In electronics, the frequencies of ACwaveforms can range from zero (i.e., DC) through kilohertz (kHz), megahertz (MHz), and gigahertz (GHz).

Grounding is a method of neutralizing a charged object by connecting it to a much larger source of charge (most commonly the earth). The immense size of the earth enables it to act as a reservoir of charge as well as a reference point with which to compare voltages.

Ground wires provide a low resistance path to the earth and help prevent electric shock in the case of faulty circuits.

Resistors are passive circuit components used to reduce current flow and voltage levels in a circuit. They are useful for modifying circuits to produce a desired amount of current.

Resistors come marked with four or five colored bands that signify the amount of resistance (and tolerance) they provide. The last band indicates the tolerance in the resistor, whereas the second to last band represents the multiplier, or what the first two or three bands are multiplied by to find the resistance.

If the resistivity of the resistor’s material is known, the resistance can be found using the following equation:

where \(⍴\) represents the resistivity of the conducting material, L is the length, and A is the cross-sectional area.

Resistors can be used in a circuit in series, in parallel, or in series-parallel fashion. Depending on the type of composition, the equivalent resistance, or resistance for the entire circuit, is calculated in different ways.

A variable resistor is one that’s resistance can be changed to any value within its range. When making frequent adjustments, like adjusting the volume on a television set, variable resistors are employed.

A potentiometer is essentially a single resistor with terminals at each end and a movable contact that can be set to any point on the resistor. Terminals A and B in the following figure are the end terminals, and terminal C is the adjustable contact. Potentiometers are commonly used as voltage dividers. 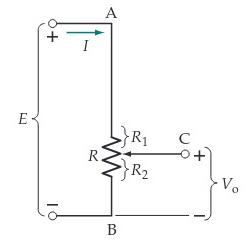 A circuit is shorted when the intended pathway of the current in a circuit is “shorter” than it is designed to be. A short circuit is undesirable because of the surge in current running through the circuit and the possible dangers associated with this surge.

Capacitors, like resistors and inductors, are passive circuit components. They serve to temporarily store electrical energy in a circuit. When connected to a voltage source, a conductor becomes charged. The voltage source can then be disconnected, and the capacitor functions similarly to a battery in that it can discharge and provide energy to a circuit.

where C is capacitance, Q is charge, and V is voltage.

Capacitance is measured in farads.

In response to the frequency produced in an AC circuit, capacitors have an impedance that is known as capacitive reactance. This reactance can be calculated using the formula:

where \(\omega\) is the angular frequency and C is the capacitance.

Semiconductors are components that can function as either an insulator or a conductor. Silicon and germanium are the most commonly used semiconducting materials. Unlike conductors, semiconductors increase in conductivity when their temperature increases.

Diodes and transistors are both examples of semiconductors.

Doping is the process of adding impurities (in the form of extra or absent electrons) to a semiconducting material as a means of altering its electrical properties. Through doping, a semiconductor can become more or less conductive. 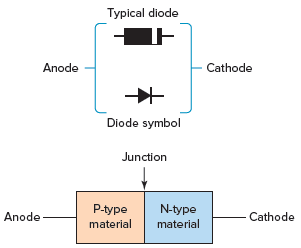 Diodes are electrical components that restrict the movement of current to only one direction and block the motion of current in the opposite direction. They are used in bridge rectifiers to convert AC to DC.

Forward-biased—The diode is considered to be forward-biased when the polarity of the battery allows electrons to flow freely through it.

Reverse-biased—The diode is described as reverse-biased when the polarity of the battery prevents electrons from flowing through it.

A half-wave rectifier is an electrical circuit that consists of an AC source, a load resistor, and a diode that allows only the positive half cycles of the alternating current sine wave to pass, resulting in pulsating DC.

A full-wave rectifier is an electrical circuit that uses two diodes and a center-tapped transformer to generate pulsating DC.

Transistors are three-terminal semiconductor components used to regulate current and voltage in a circuit. They can amplify current and act as electrical switches.

Base—The base is the region between the collector and the emitter and acts as a trigger for high emitter-to-collector current.

Emitter—The emitter emits charges into the collector through the base.