There are a number of things you should remember to help you in arithmetic calculations, especially when it comes time to evaluate your answer for accuracy. With this knowledge, you’ll often be able to just look at an answer and determine whether it could be right, or is most definitely wrong.

Even and Odd numbers

If the number is evenly divisible by its divisor, the even/odd property is the same as with multiplication. Otherwise there is a remainder, the quotient is a fraction, and so is neither even nor odd.

On a number line, values increase positively to the right of zero and negatively to the left. The further you go in either direction, the larger the numbers, but the value of the numbers only increases as you move right and decreases when moving left.

Note: If a number does not have a negative sign, we assume it is positive.

Subtracting a negative number is the same as adding a positive number:

With division, the property for signs is the same as with multiplication, although, note that if the integer is not evenly divisible by its divisor, the result is a fraction, not an integer.

The absolute value of a number is best thought of as its distance from 0 on the number line. We sometimes use this symbol when working with negative integers, placing it between two of these vertical line symbols: \(\vert\)

To define absolute value takes two equations and makes it a nice example of a piecewise function. Suppose you have the simple equation \(y=\vert x \vert\). If \(x\) is positive, then we just have \(y =x\), but if \(x\) is negative, we have to change it to positive by negating the negative.

The two different equations to define \(y=\vert x \vert\) are: 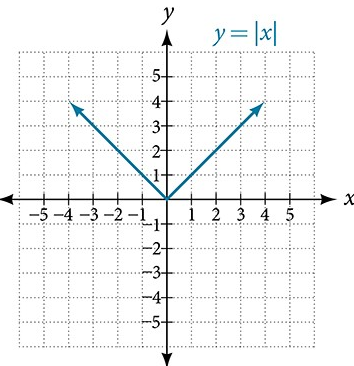 To summarize, a piecewise function is one in which more than one equation is used to define the output of the function.

Multiplication is repeated addition: it is adding the number being multiplied a certain number of times. For example with the expression \(2\cdot 4\), we add 2 four times to itself like so:

You can see this is equal to the product we memorized in grade school multiplication tables.

For example if we have four apples, and we want to share them among two people, we divide 4 by 2:

Each person gets two apples.

An integer that is not a prime number is called a composite number, and it is evenly divisible by other integers (not just one and itself).

Suppose two numbers, say \(30\) and \(24\), have factors in common. The largest of those is the greatest common factor.

Prime factorization is the process of factoring a given number so that all of its factors are prime. For example, in the section above, we found all the factors of \(24\), but only \(2 \text{ and } 3\) are primes, so we’re going to have to use them multiple times to get \(24\). A good way to do that is by successive division until you reach \(1\):

A multiple of an integer is a product of two or more integers. The number 12 is a multiple of all six of its factors, because those factors multiplied together in the right combination produce the number 12.

The remainder refers to the quantity left over after dividing one number by another: with \(16\div 5\), 5 divides 16 three whole times, leaving a remainder of 1.