This test is generally given to entering college students who are either majoring in non-STEM-related fields or who have not yet declared a major. All questions are multiple-choice and are fairly evenly divided among these skill areas. Areas listed here in italics may be slightly more emphasized than the others.

In spite of the fact that the questions on this test may require more than one step and some mathematical reasoning, your fluency with math operations is also tested, so be sure accuracy is not a problem. You can check out the study materials we offer for the Accuplacer Next Generation Arithmetic Test for practice in accuracy and fluency.

Note: It would be best to check with your testing center for confirmation, but our information indicates that no handheld calculators are allowed during any Accuplacer tests. Apparently, there are some questions that allow calculator use and, for those questions only, an onscreen calculator will appear.

It is important that you understand how to perform all operations with rational numbers in any of their various forms (e.g. decimals, fractions, or whole numbers).

A rational number is any number that can be written as a fraction in which the denominator is not \(0\). These, for example:

Absolute value is designated by two vertical bars surrounding an expression, like so:

Ratios relate parts to parts and parts to wholes. Proportions relate ratios to other ratios.

A ratio is a relationship between two values expressed as a fraction. Expressions like for every car there are three trucks and miles per hour both indicate a ratio between two things; the first expression can be written in fractional form as:

and the second expression can be written as:

Proportions can be used in cases where two or more ratios are known to be equivalent. Consider this example:

Set up a proportion to represent the problem:

Proportions are useful for finding the unknown side lengths of similar objects, particularly triangles. 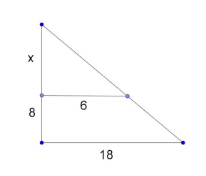 A proportion can be established between the two triangles (as they share two sides):

A rate expresses the relationship between two quantities of different units. Miles per hour, dollars per minute, and degrees per second are all examples of rates.

Unit rates express a rate in which the denominator is reduced to one. For example, if Sally drives \(200\) miles in \(3.5\) hours, the unit rate describes how many miles she drives in \(1\) hour; stated algebraically, and utilizing a proportion:

Two rates that reduce to the same unit rate are called equivalent rates. Equivalent rates can also be formed by multiplying or dividing both the numerator and denominator of a rate by the same value. A unit rate is always equivalent to the rate from which it was reduced.

It can also be determined how many miles she could drive in \(10\) hours:

Note that when we say, for example, “Sally was driving \(57.14\) miles per hour,” what we are really doing is using a unit rate to talk about her speed. Unit rates make it easy to compare things like speed when distances and the lengths of time traveled differ.

Converting between different units is absolutely crucial for success in the STEM fields. Fortunately, the method of dimensional analysis enables easy assessment of conversion accuracy given that each step of the process eliminates an intermediate unit. An example will prove instructive:

Consider the conversion of \(1.6\) hours to microseconds. Dimensional analysis entails a series of multiplications by conversion factors.