The solution of a system of two linear equations is defined as the point at which the two lines intersect. Consequently, the possible solution falls into three distinct cases: there is no solution, there is one solution, and there are infinite solutions.

There is no solution to a system of two linear equations that share the same slope, but are not multiples of one another. For example:

The system \(y = 2x\) and \(y = 2x - 4\) has no solution because these lines never intersect and neither line can be formed by multiplying the other by a constant.

Systems of equations can be solved in many ways, but the methods of substitution, elimination, and graphing are the three most common methods that you will encounter prior to advanced math courses.

As an example, consider the system of equations, which we will solve using substitution and elimination:

The method of substitution entails solving one of the equations for a variable, then substituting the expression that the variable is equal to into the same variable of the other equation. Begin by solving the first equation for y:

The y variable in the second equation can be replaced with the expression \(-2x + 4\):

Notice that the equation now only contains one variable, which can be solved exactly by combining like terms and isolating the variable:

Now, the value of x can be substituted into either equation to solve for the variable y:

Given the original system:

it can be seen that adding the two equations together eliminates the x variable:

\(2y = 2\), which simplifies to \(y = 1\).
And, as before, this value of y would then be substituted into either original equation to determine the x value.

The method of graphing will be dealt with in coming sections.

Linear equations (and inequalities) find extensive applications in real world contexts. Developing the ability to assess a collection of variables and to produce an algebraic relationship or a graphical representation of a situation is invaluable not only for students pursuing a career in the STEM fields, but for anyone interested in presenting data or information to others.

We know that each mp3 costs $0.99, so we can produce a function that relates the cost and the number of mp3s through this constant price:

We have produced a linear equation that relates cost to number of mp3s purchased. We can translate this algebraic into a graph that looks like the following: 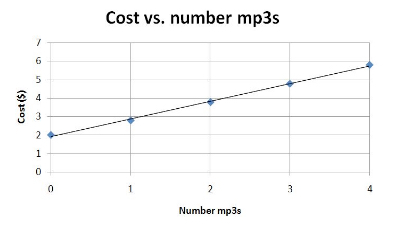 This is a function in two variables, as a result, it requires 3-dimensions to graph and will not be covered here.

Graphing a linear equation in two variables entails translating an equation like \(y = 3x + 2\) into its corresponding picture: 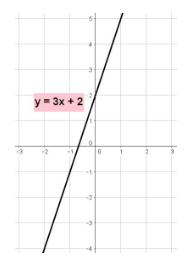 Another method for graphing the line \(y = 3x + 2\) is to notice that it is written in slope-intercept form, and explicitly provides both the slope and y-intercept of the line. The slope in this case is 3, and the y-intercept is 2 (recall that the y-intercept is the y-value at which the line passes through the y-axis).

The solution set to a linear equality is every point that lies along the line.

The above inequality graphs as: 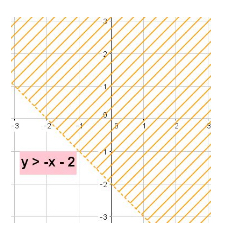 There are two details to notice in this graph. One: the line formed by the equation \(y = -x - 2\) is dashed. Two: every point above the dotted line is shaded. 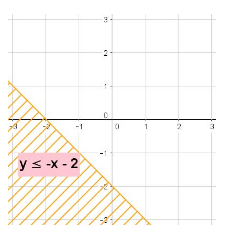 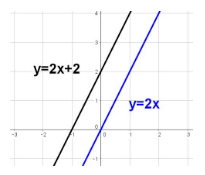 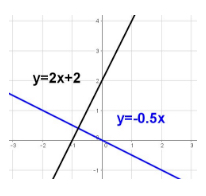 The first case is a system of equations that share the same slope but have different axis intercepts: 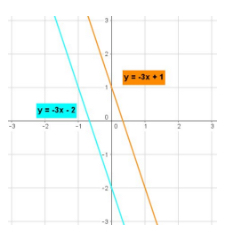 The second case is a system of linear equations that have different slopes that are not multiples of each other: 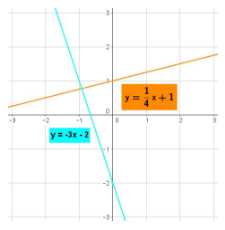 Linear equations that have different slopes that are not multiples of each other intersect at exactly one point. The point of intersection is the solution set of the system. 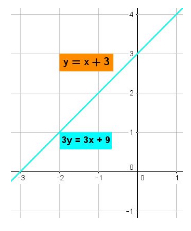 Notice that only one line color can be seen. This is because the other line color is underneath the blue color shown. Linear equations that are multiples of each other produce the same line when graphed, and as a result, the solution set is an infinite number of values corresponding to the infinite number of points that make up both lines.

ACCUPLACER® is a registered trademark of the College Board® which was not involved in the production of, and does not endorse, this website.