Percentage is an extension of ratios. The ratio of 2 parts to 5 parts consisting of the whole, written as 2:5 or 2/5, may also be expressed as 40%.

Percentage is solved with this formula:

The percent change part on the left side of the formula is in % form and not in decimal form. This is important to remember because this is not always easy to check, especially when the question does not provide information in actual numerals, such as in this example:

If the densities of certain objects and substances are known, their mass can be computed given a certain volume, or the other way around.

It is important to know how to read graphical representations of data. Three of the types of graphs commonly seen in SAT exams are the scatterplot, box-and-whisker plot, and histogram.

A scatterplot is also referred to as an \(XY\) plot. 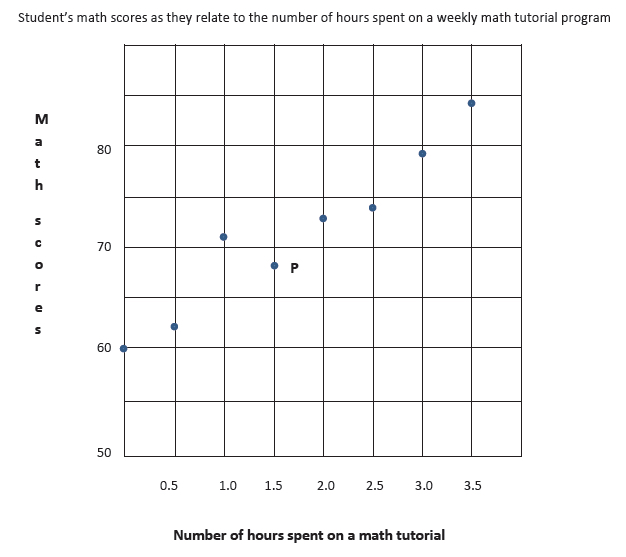 A point in the graph represents two values. For instance, point P represents 1.5 hours of tutorial (the \(x\) value) and a score of 68 (the \(y\) value). Viewing the whole scatterplot, we see that as the number of hours spent on the tutorial is increased, the student’s scores increased also. Related topics best-fit line or curve and correlation will be taken up under a separate heading below.

Box-and-whisker plots are also referred to as boxplots.

A box-and-whisker plot is made up of a rectangular box with two horizontal lines on both ends. It looks like this:

A histogram is a graph that uses columns or bars on an \(x\)-\(y\) plane to show the distribution of each element in a group of elements. The labels on both the \(x\) and \(y\) axes represent quantitative data, such as the number of athletes in a high school counted according to different height ranges. 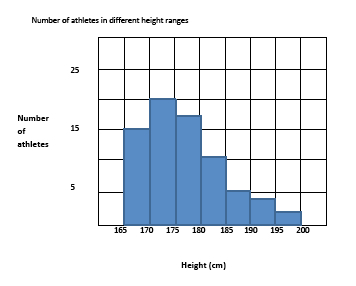 The histogram shows the frequency with which each height range occurs in the data set. It is skewed to the right, which means that most of the athletes are on the shorter end of the scale (52 athletes have height measurements between 165 cm and 180 cm), with fewer athletes on the taller end.

A graph showing the number of a school’s athletes (label on the \(y\)-axis) in its basketball, volleyball, soccer, and swimming teams (label on the \(x\)-axis) is a bar graph because it represents categorical data, not quantitative data. Since the labels are categorical, we cannot appropriately refer to a bar graph’s skewness, or to its low or high end. Is there a graph missing? It can seem confusing to talk about a graph that isn’t there.

Two-way tables are usually used to present survey results in tabular form. The columns show the count or number for one category, while the rows indicate another category. The two-way table below shows the result of a survey conducted on 125 college students on the brand of beverage they prefer to drink during lunch break.

Many questions can be answered by directly finding the correct cell, such as, “Which brand is the least preferred by male students?” The table can also be used to compute answers which may not be readily provided.

The two-way table given above as an example is presented as a frequency table, so-called because it shows the frequency or the count that an event occurs. In the context in which the example was given, the frequency is the number of times that a particular brand of beverage was chosen by the participating students. The numbers in the inner cells are called the frequencies or count.

Note: We are showing the division of terms to illustrate the procedure, although relative frequency tables are normally shown with just the resulting decimal numbers.

Your understanding of these concepts will usually be tested in the SAT exam, along with the concept of probability.

Here are some probability questions in the format that usually appears in SAT exam questions. The solutions are usually simple, but the questions need a little getting used to.

Referring to Table 1, what is the probability of randomly selecting a male participant who prefers Brand B?

(Take note that 0.04 is a conditional frequency in Table 2.)

The concept of probability and formulas related to it will be discussed further in its appropriate heading below.

(Again, take note that 0.25 is a conditional frequency in Table 4)

What is the probability of randomly selecting a participant who prefers Brand B, given that the participant is male?

(And isn’t this the same conditional frequency in Table 3?)

The conditional frequencies in Table 2 show the probability of a gender preferring a particular brand of beverage.

Tip: In the test, always be aware that the term “given” in this type of question gives the question a whole new meaning. Also, it will not always be necessary to prepare the relative frequency tables in order to answer questions like the three provided examples. We only wanted to show how the concepts are related.

Line and Curve of Best Fit

From the previous example of a scatterplot, the “line of best fit” can be drawn. It is useful when describing the trend and when making estimates or projections by interpolation or extrapolation. From this line, the best-fit equation or regression equation can then be determined using algebra (straight lines and linear equations). 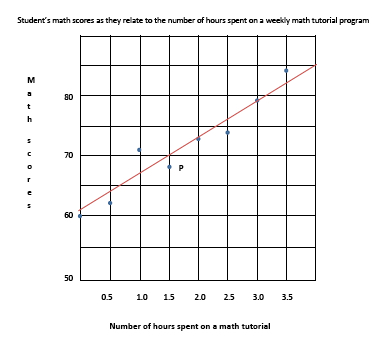 The equation for the line of best fit, however, will not always be linear. It can take a quadratic or exponential model for its curve of best fit.

We say that there is a high positive correlation between the two variables because as one variable increases, the other also increases.

For the set of variables shown in the scatterplot above, their relationship is best modeled by a linear function. Using the points and solving algebraically, we find the slope to be \(+6\) and the linear equation to be:

There is a linear relationship when the difference in values (increase or decrease) is constant. However, when the difference in values is not constant, but the ratio of adjacent values is constant, we refer to the relationship as exponential (growth or decay). Classic examples of this concept are the growth of bacteria, a population increase of rabbits, and compound interest.

The general formula for exponential growth or decay is:

This topic is given more depth in the Heart of Algebra section. For the PSDA section, it will be enough to understand the meaning of these concepts in relation to data, such as those given graphically.

When a die is thrown, that is an event. Its result is independent of other dice thrown before or after it. In a European roulette wheel, the probability of a number appearing will always be 1/37, no matter the number of times the wheel is spun. Each spin is an independent event and not affected by the other spins.

Associated events refer to variables or events that have a relationship or connection. They may also be referred to as correlated variables. Relationships can be causal (one variable causing the change in the other variable), and variables can be quantitative or categorical.

The example on the scatterplot earlier shows associated events – increase in hours for math tutorial and increase in scores. There clearly was an association or a high positive correlation between the two variables in that example.

A population is a group of entities or events with a common characteristic. It often refers to a group of people, although it may refer to other entities, as well. Examples of a population are:

Measurement Error and Margin of Error

When estimating a population parameter based on a sample statistic, it is expected that the resulting estimate will not be the exact, or true, value. What can be expected from a completely randomized sampling, instead, is the closest estimate to the true value. A margin of error is often used to describe the precision of such an estimate.

On the SAT exam, you will not be asked to calculate margins of error. They usually appear as part of the given information and you are expected to understand their implication to the question.

If the sample mean height is computed to be \(121\) cm and the SAT question provides the information that there is a margin of error of \(1.3\) cm, it means that the population’s true mean height falls within the values of \(121 \pm 1.3\).

Here are things to remember about the margin of error: