Numbers can be classified as real or imaginary. Real numbers include whole, rational (numbers that can be written as fractions or ratios) or irrational (such as pi and most roots) numbers.

Familiarity with various types of numbers will facilitate answering questions such as this example:

“Which of the following choices correctly sorts these numbers from the least to the greatest value?”

Ratios are used to compare values. When comparing two or more values, part-to-part ratios or part-to-whole ratios can be used. Most ratio questions can be solved with logic and very minimal computation, such as in this example:

“The ratio of boys to girls in a class of 50 students is 2:3. The students need to create 10 groups where each group must have an equal number of boys as there are girls. How many girls will not be included in the groupings?”

Learn, as well, about improper, mixed, and equivalent fractions.

It is also important to know how to determine the greatest common factor (GCF); this is used when simplifying fractions.

Learn how to find the least common multiple (LCM); this is useful when comparing fractions and when performing addition and subtraction of fractions.

The concept of decimals is an extension of the subject of fractions. The fraction \(\frac{1}{10}\) is the same as the decimal \(0.10\). Make sure you can convert decimals to fractions and percentages with ease. Without a calculator, some questions that include decimals can be more easily solved using fractions. Multiplying \(\frac{1}{4}\) by \(\frac{3}{4}\) is far simpler and quicker than multiplying \(0.25\) by \(0.75\) manually.

Your math skills must also include the ability to add, subtract, multiply, divide, and raise decimals to powers.

Numbers that are not real are called imaginary numbers, and are indicated by the notation \(i\). The imaginary unit is equal to the square root of \(-1\), or:

When imaginary numbers combine with real numbers, they are called complex numbers. Try this question:

Which of the following choices gives the correct value of \(3i^{26}\)?

Before you start with the tedious repeated multiplication (\(26\) times!), let’s get acquainted with this unique property of \(i\): When \(i\) is multiplied by itself (or raised to an exponent), it follows this repetitive \(4\)-point cycle:

The seemingly difficult sample question above, then, becomes an easy one with this solution:

Vectors are values with magnitude and direction. Vectors are written in a row or column. This is a vector:

And here is another:

The two vectors can be added to get the resultant vector below: 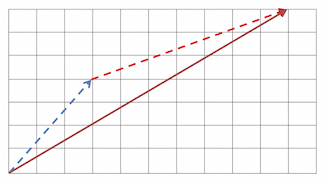 Without the visuals, though, we ought to know now that we add vectors by adding the corresponding elements in the row or column:

Matrices, on the other hand, are an array of values in rows and columns. There can be one or more rows, and one or more columns. So a vector is also a matrix. The determinant is a number computed from a square matrix, such as a \(2\)x\(2\) or a \(3\)x\(3\) matrix.

Vectors, matrices, and determinants are useful in solving systems of equations. A system of linear equations, for example, can be solved using matrices, instead of the elimination or substitution methods.

These concepts also find application in calculus, physics, and astronomy. At this level, you are expected to know how to perform the basic operations using vectors and matrices, and to calculate the determinant.

The concepts mentioned involving natural numbers and integers are part of the study of numbers, called the Number Theory. Explore the properties of odd and even numbers, primes and composites, and prime factorization. You will find these number properties useful when reasoning out mathematically. Other types of numbers, albeit rarely seen in this test, are perfect, triangular, and Fibonacci numbers.